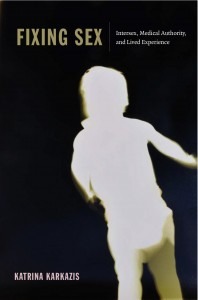 Published in November 2008, Fixing Sex: Intersex, Medical Authority, and Lived Experience by Katrina Karkazis is compelling and recommended reading. Meticulously researched and approachable in style, it presents a historical analysis of the treatment of intersex people, together with an analysis of both current medical practice and the impact on intersex people and our families.

Fixing Sex is the best book I have ever read over the years which deals with the ethical issues which have plagued the intersex community, parents and doctors. One reason is that it is meticulously researched and in the introduction, the author helps the reader understand her methodology and also makes it transparent and easy to grasp for the reader who is not familiar with such research.

The author is also very accurate about the medical aspects of various intersex conditions (something that often was not true with previous books by researchers dealing with the ethical debate, unfortunately.) However, the main reason I feel the book is a success is that is shows respect for ALL stakeholders, something which has thus far not been the case and this will help in the future I hope in such a way that not just the parents and doctors will be able to have a dialog, but actual intersex adults also will be more likely to be included.

She has done something that is very difficult to do. Katrina Karkazis has written a book that both I (an intersex activist) and a medical doctor can read and understand and not be upset about. Now that is a tour de force.

From the publishers’ description:

Katrina Karkazis offers a nuanced, compassionate picture of these charged issues in Fixing Sex, the first book to examine contemporary controversies over the medical management of intersexuality in the United States from the multiple perspectives of those most intimately involved.

Drawing extensively on interviews with adults with intersex conditions, parents, and physicians, Karkazis moves beyond the heated rhetoric to reveal the complex reality of how intersexuality is understood, treated, and experienced today. As she unravels the historical, technological, social, and political forces that have culminated in debates surrounding intersexuality, Karkazis exposes the contentious disagreements among theorists, physicians, intersex adults, activists, and parents—and all that those debates imply about gender and the changing landscape of intersex management. She argues that by viewing intersexuality exclusively through a narrow medical lens we avoid much more difficult questions. Do gender atypical bodies require treatment? Should physicians intervene to control the “sex” of the body? As this illuminating book reveals, debates over treatment for intersexuality force reassessment of the seemingly natural connections between gender, biology, and the body.

Katrina Karkazis is a medical and cultural anthropologist and senior researcher at the Center for Biomedical Ethics, Stanford University.

The book is available in print and as an e-book at Amazon.com and other booksellers.