This report focuses on the cosmetic outcomes of non-consensual cosmetic genital surgery performed on infants. OII Australia regards such surgeries as reprehensible, and wishes to see them cease. From the abstract:

Issues of childhood genital surgery in individuals with genital ambiguity remain controversial. Poor results reported in some centres triggered questioning of the appropriateness of such surgery in infants. Therefore, this study was done to review the anatomical and cosmetic outcomes of patients treated at Royal Children’s Hospital to see if early surgery is effective or not. 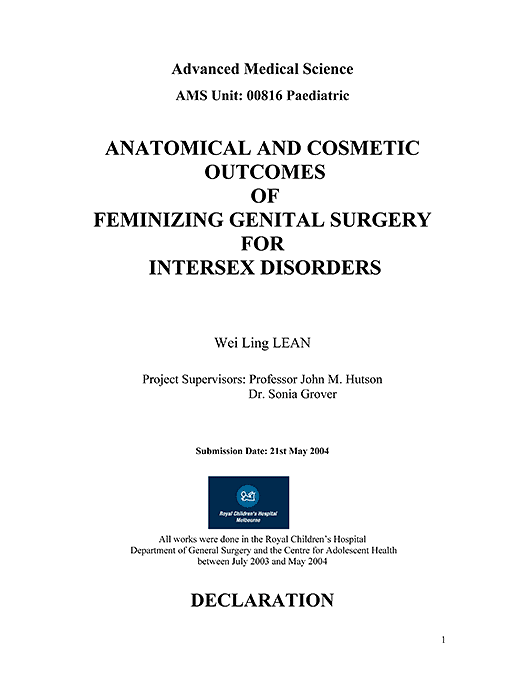 A few comparisons were made for the data collected from patients’ examination and their medical records. Of the 20 patients who had their initial surgery done at Royal Children’s Hospital, 16 have achieved acceptable overall results, whereas 8 patients from this cohort of 30 patients appeared to have poor overall results as judged by the scale used. Results also indicate that main factors affecting both anatomical and cosmetic outcomes include age at genital correction, numbers of genital operations that the affected individual had, and the nature of the surgery.

In conclusion, one-stage genital correction in early childhood can produce good outcomes in 12 of the 14 patients who had such surgery done. The poorer results occurred in patients who have had multiple procedures and may have had more severe anomalies. Operations done by non-specialised surgeons can also give poor cosmetic results. This is consistent with the view that regional centre should be established to provide optimal anatomical outcomes for intersex management. These results do not support abandonment of childhood genital reconstruction as currently practised in Royal Children’s Hospital, Melbourne.