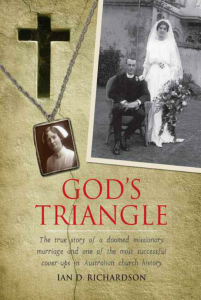 “In the Case of C and D” isn’t the only Australian case of which we are aware of an annulment of marriage due to one party being intersex, but obtaining good, detailed documentation on such cases can be a major challenge.

Broadcast journalist Ian Richardson has done an amazing job in documenting the story of his great aunt, Florence “Florrie” Martha Cox, who was born in Melbourne in 1887 and who died in the same city in 1950. His account of his great aunt’s story is currently available as an e-book on Amazon.com.

His persistent investigative research ultimately led to the supervised opening of sealed court records. Sparked off by a photograph of Florrie Cox’s wedding, Richardson found, along the way, that records of the marriage in the Baptist Church had been destroyed, and that the families involved had also destroyed or hidden their records. It was a case of great shame.

Florrie was born into a devoutly religious family, she was engaged to Frank Paice in Melbourne in 1912, and they married in Calcutta in December 1914, in the course of missionary work in Bengal. Their divorce took place less than five years later, in 1919, following an annulment by the Baptist Church of Australia.

Richardson’s attempts to obtain further information on the case were knocked back by the Court, even though the original proceedings were public. Unusually, despite this, the proceedings were not reported in the newspapers at the time. In the course of repeated efforts to obtain access to court proceedings, and in collaboration with the son of Florrie’s former husband, the Registry Officer of the Supreme Court, Paul O’Halloran is reported as telling Richardson in October 2000 that:

because of the “sensitive nature” of the file, the court would not be prepared to release them. When I asked him to explain what he meant by “sensitive nature”, he said he guessed that any revelations about my great aunt’s gender would have been viewed as “quite shocking”.

THAT at the time when the said ceremony of marriage was celebrated the said Respondent was, and ever since has been, and still is unable to consummate the same by reason of the malformation frigidity or other defect of the parts of generation of the said Respondent and such defect is incurable by art or skill and will so appear upon inspection.

Florrie was obliged to undergo just such an examination.

The story of Richardson’s research can be found in his book, including a realistic assessment of the nature of his great aunt’s intersex variation – which he’s asked us not to disclose in a review of his book.

Richardson’s book makes for sad reading: the circumstances were clearly deeply traumatic for Florrie, and her family. Florrie became ill in the years immediately after the annulment and died in an asylum. In contrast, her former husband promptly married a longstanding friend and they went on to have children and a respected place in society.

We’re grateful to Ian Richardson for bringing this history to light. We hope that this, and stories like it, will help to create more acceptance of human diversity and end the secrecy and shame. And we hope that intersex people will at some point be free to enter into marriages without the threat of annulment.