According to two regional newspapers, Glenda Graban of Picton, NSW, has persuaded the NSW Health Department to change the name of the NSW Birth Defect Register to something kinder and more humane. Great work, Glenda! 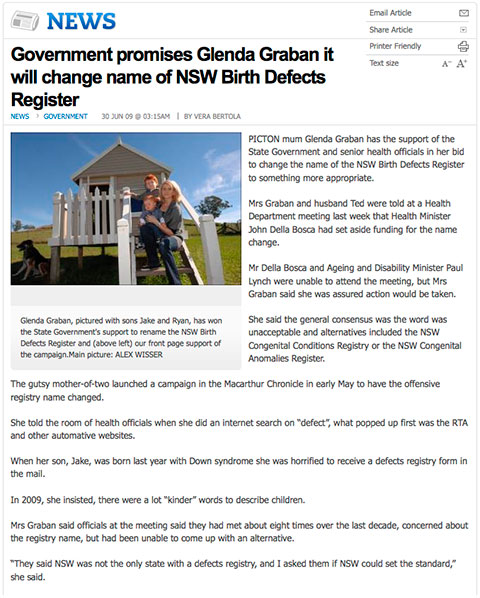 It is reported that NSW Minister for Health John Della Bosca has agreed in principle to the change of name, and has allocated funds to underwrite the costs. It has not been decided yet what form the new name should take. So far NSW Congenital Conditions Register or the NSW Congenital Anomalies Register are being considered, apparently.

Intersex should be a reportable variation so that statistics can be generated that reflect the realities of intersex births.

The evidence is that the prevalence of intersex is currently neither recorded nor reported, and that the consequence of this omission – the mistaken belief that intersex is ‘incredibly rare’ – is used as justification for the lack of medical services for intersex people, and the exclusion of intersex from the education of doctors, nurses and other medical support staff.

Intersex is not a defect nor an anomaly but a natural variation.

At a probable prevalence of 1:60 or 1:100, as put forward by experts of the calibre of Profesor Milton Diamond, intersex is hardly rare.