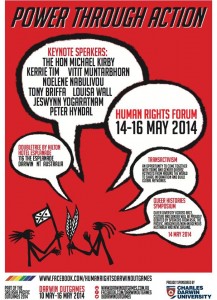 Tony Briffa spoke on “Nothing about us without us – Stepping out of the shadows and giving intersex people a voice” for OII Australia and the Androgen Insensitivity Syndrome Support Group Australia at the Darwin Outgames Human Rights Forum on 15 May this year. Here is the speech.

I would like to begin by acknowledging the traditional owners of this land, and, as we are at a forum specifically for gay, lesbian, bisexual, transgender and intersex people, I wish to particularly pay my respects to GLBTI indigenous people.

My name is Tony Briffa. I am an intersex person and I am here representing the two national intersex organisations in Australia – Organisation Intersex International Australia (OII) and the AIS Support Group Australia.

This forum’s vision is about ensuring social inclusion, participation and freedom from discrimination, so I am going to talk about those things from an intersex perspective. My talk is titled “Nothing about us without us – Stepping out of the shadows and giving intersex people a voice.”

Firstly, I’ll give a brief background of what intersex is so we’re all on the same page. Intersex is about people who are born with a body that is outside of what is typically male or female. It is about a person’s natural biology.
I should also explain what intersex isn’t! Intersex is not about sexual orientation. It’s not about gender identity, transitioning from one sex to another or about being gender diverse.

That’s not to say there aren’t intersex people that are also gay, lesbian, bisexual or transgender. Like the rest of the population intersex people can have a variety of sexual orientations and gender identities.

Some might ask why intersex people are included in the GLBT community if being intersex is about biology and not sexual orientation or gender identity. The answer is simple – intersex people face similar issues with heteronormativity that GLBT people face. The prevailing assumptions about what it means to be male or female affects intersex people just as it affects GLBT people.

History of being silenced

Intersex people have been mistreated by society throughout history. In years gone by, some of us would have ended up in a sideshow as a “bearded lady” or “freak of nature”. Others would have lived a life of isolation, never even speaking about or understanding why they were “different”.

Sadly, the situation isn’t much better in current times. In some African states intersex children born with obvious differences at birth are left to die. In India, we know of families that value boys but see girls as possessions, so parents insist on raising an intersex infant as a boy despite their child having female genitals and not being able to respond to male hormones.

The situation thankfully has a few positive stories of hope. In the Dominican Republic, for example, where there is a high prevalence of an intersex variation known as 5 alpha reductase deficiency syndrome, intersex people with that variation are respected and accepted openly.

A large portion of human rights abuses to intersex people in western society is at the hands of the medical community. These abuses usually occur to intersex infants and children. Disturbingly, doctors co-opt parents into being a part of the abuse by misleading them into believing their children have serious medical conditions that require medical intervention. Some parents are even told their child has significantly increased risks of cancer – a risk that is not based on medical evidence. Parents agree to interventions believing they are doing the right thing for their child, only to learn of the adverse impact that decision had on their child when their child grows up. This in turn has damaged many relationships between intersex people and their parents.

Intersex groups worldwide recommend raising intersex children as girls or boys (as opposed to a third sex or no sex) but that any genital normalisation surgery or removal of healthy gonads should not be performed until the child is old enough to provide consent. This is consistent with the Australian High Court position that protects children from irreversible and non-therapuetic treatment until they can provide consent or a court makes that decision in the best interests of the child.

Doctors however, insist on making intersex children into what they believe a girl or a boy should be. Invariably this means being a girl or a boy that is going to grow up to be a heterosexual woman or man with no atypical biological attributes of the opposite sex. It doesn’t matter whether the intersex person consents to the procedures or not, or whether the procedures are medically required. Incredibly, these treatments occur without the approval of a court and are in stark contrast with the way trans children are treated. Their natural body is protected at all costs, and are not given any hormonal or surgical treatment until they can provide informed consent or a court gives approval.

So what does this have to do with giving the intersex community a voice?

Doctors have been the voice of intersex people for decades – and they are largely our oppressors. They have misrepresented intersex people as being defective people requiring their intervention. Expressions they’ve used in the past to describe us include:

In recent years doctors have taken the position that they don’t want to refer to us as intersex people, but as people with “Disorders of Sex Development”. This is very offensive and disrespectful and is widely rejected by intersex organisations and individuals in Australia. It’s a term that not only patholigises us, but reasserts the view that we are defective people requiring the intervention of doctors to help us.

Clearly intersex people need our own voice. We need a movement. In the last 20 years intersex groups have formed around the world, and thanks to the internet and groups like ILGA, we’ve been able to come together from all parts of the globe to establish clear policies and demands about our human rights.

“Nothing about us, without us” is a catchphrase used to express the idea that issues affecting a particular community should not be considered without the full and direct participation of that community. It makes a lot of sense, and it’s respectful. Imagine what it would be like for white Australia to be the voice of our indigenous community, or for a man to be the voice for women’s issues. Imagine if a government undertook law reform about an issue that directly affected women but did not consult with women. It would be outrageous.

The intersex community is now asserting itself as wanting its own voice. We don’t want to be silenced and we don’t want other people speaking on our behalf. We need people to hear from us about our stories, our experiences and our aspirations.

Sometimes even well-meaning groups effectively silence us, even within the GLBTI community. If there is a consultation about law reform on things like marriage equality, birth certificates or even a review about a service that affects intersex people, intersex people must be included and genuinely consulted. We must be at the table as equals.

I recognize this also highlights the importance of respectful and genuine relationships within the GLBTI community. We all know it’s important to have allies in a human rights movement, but what does a good ally look like? I think one of the attributes of a good ally is someone that supports your cause, but does not speak on your behalf or claims to represent your community. I think it means they insist that issues affecting a particular community includes that community at all stages of the conversation about that issue. It means acting ethically, responsibly and respectfully.

The problems with being misrepresented, the confusion in the wider and GLBTI community about what intersex is, and the shame and stigma felt by many intersex people about their intersex variation means very few intersex people are willing to share their stories and become activists for change. They realize once you “come out” as an intersex person, there is no going back. People still even confuse being intersex with being gay or trans. This is an ongoing challenge for our community that hopefully will be overcome as society better understands intersex people and our issues. This is another reason why giving intersex people the chance to speak for ourselves and tell our stories is so important.

As a result of good, collaborative, respectful relationships we’ve had several significant wins in Australia in recent times. These have included the federal antidiscrimination legislation for all GLBTI people, and a report by the Australian Senate’s Community Affairs References Committee on the “Involuntary or Coerced Sterilisation of Intersex People in Australia”. As I look across the room here I also refer to good relationships and collaborations with Equal Love (Melbourne), Val’s Café (Melbourne), Beyond Blue (National), LGBTI Health Alliance (National) and the Victorian Gay and Lesbian Rights Lobby. We have similar relationships in NSW as well.

Internationally we’ve even come up with a strong consensus statement about intersex human rights and issues thanks to the support of ILGA. There is no doubt the UN is becoming more aware of intersex issues as our allies assist and support intersex groups.

The intersex movement has come a long way in the last 10 to 15 years. I hope to see more GBLTI organisations become genuinely intersex inclusive and strong, respectful and ethical allies. Together we can raise awareness that there is more to the world than straight, non-intersex, or gender-conforming people. Sharing our stories, as you saw today, is an important part of that.

I would like to thank the organisers of the 3rd Asia Pacific Outgames Human Rights Forum for being genuinely inclusive of intersex people. They’ve provided a great example of a good ally by showing the importance of giving intersex people a voice.