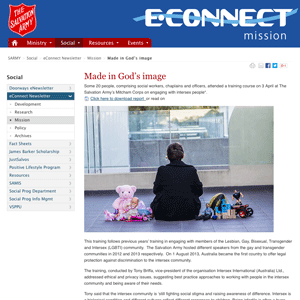 Tony Briffa held a training and education event for the Salvation Army at the Mitcham Corps in Victoria on 3 April. An article about the event has now been posted to the Salvation Army’s Australian website. The training addressed ethical and privacy issues, and suggested best practice approaches.

Tony said that the intersex community is ‘still fighting social stigma and raising awareness of difference. Intersex is a biological condition and different cultures reflect different responses to children. Being infertile is often a huge issue for us; intersex people want the same as other people – they want loving relationships, and to be able to adopt and have families.

‘I would love for governments, churches and NGOs to understand we are people, just like them. We are just made this way.’

Tony explained there were ethical issues for intersex children and their parents, such as genital surgery on children that was not medically required and performed before the child was old enough to competently provide consent. Tony compared this with female genital mutilation and also raised numerous issues around social inclusion.

Tony discussed the concept of ‘heteronormativity’, which means people are assumed to be exclusively male or female and heterosexual.

‘While most intersex people look like other males and females externally,’ she explained, ‘some are born looking atypical; in those cases the aim of doctors is to create a child that is exclusively male or female, and will grow to be heterosexual. This denies them the right to bodily autonomy and can have significant impact on them later in life. It can also affect the relationship between the intersex child and their parents.’

We would like to thank the Salvation Army for their hospitality and consideration of intersex issues, and welcome Salvationists to the OII Australia website.

OII Australia can offer training and education services in Melbourne and Sydney, and other locations.