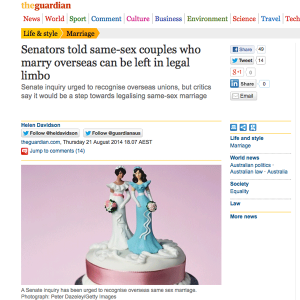 The Senate of Australia is currently engaged in an inquiry on the recognition of foreign same-sex marriages. Tony Briffa married Manja last year, in New Zealand, in a marriage that is not recognised as either opposite sex, nor same-sex, marriage. Tony wrote a personal submission to the inquiry, which OII Australia supported.

Tony spoke at a hearing of the Senate inquiry in Melbourne on 21 August 2014, and the Senate Committee reported on 25 September 2014.

While there was no consensus on the recognition of foreign same sex marriages, the hearing and submissions on intersex issues led to cross-party support for more work on intersex rights. From the majority report:

2.61 … She argued that even if the Bill were passed, she would be ‘one of the few people in Australia that cannot actually be legally married’.

2.62 She further pointed out that the Marriage Act as it currently stands is not clear with regards to whom she would be allowed to marry …

Committee comment
2.66 The committee is concerned by the issues raised in relation to the recognition of marriages for intersex people, as well as their recognition in Australian birth certificates and passports.

2.67 Whilst the recognition of intersex people in Australian birth certificates and passports is not germane to the terms of the Bill subject to this inquiry, the committee urges the Commonwealth government to give further consideration to the evidence of Tony Briffa regarding intersex rights and intersex marriage and to how these issues can be addressed.

We thank the Committee for these welcome statements.

Recommendation 1
1.20 The Australian Greens recommend that new section 88EA be amended to replace “a woman and another woman” and “a man and another man” with “two people”.

Intersex human rights issues were acknowledged last week by the Australian Senate in a report, as part of the Inquiry on the Recognition of Foreign Marriages Bill 2014. This follows the report on the Involuntary or Coerced Sterilization of Intersex People in Australia last year. Although the Senate Committee is recommending the Bill not be passed, it singled out issues relating to intersex human rights in Australia when it comes to marriage recognition.

I am extremely pleased the Senate acknowledges the issues faced by some intersex people when it comes to marriage, birth certificates and other documents, and we look forward to continuing our work with federal, state and territory governments to address these issues.

On the basis of Tony’s strong intervention we are somewhat more confident that, when marriage equality becomes a reality in Australia, it will be fully inclusive of intersex and all other adult couples. We’d like to express our warm thanks to the Senators engaged in this committee, and in particular the Committee chair, Senator the Hon. Ian Macdonald, and those Senators who supported intersex inclusion in their dissenting or additional comments.

Transcript of the Senate hearing

This is an extract from the draft (“proof”) transcript of the hearing. Please note that Tony prefers female titles and pronouns, and is misgendered in this extract.

Senators, thank you very much for having me here today. The Recognition of Foreign Marriages Bill is one that is personally very important to me and it is also important to people that I represent. I am here as Vice President of Organisation Intersex International Australia Limited and the AIS Support Group Australia. Both of those organisations are the Australia-wide intersex organisations. I said the word ‘intersex’ a few times there—what is intersex? People often confuse it with gender identity, or being trans, or being all sorts of things. It is actually about biology. I was born with a condition, with a variation that meant that I am partially male and partially female. It is a challenge at the best of times for many of us, but that is just the way nature made us. If you like to use the religious parlance, it is the way God made us. We cannot help it, it is the way we were born.

The bill before us is important to me. It is particularly about same-sex marriages solemnised in foreign countries. It assumes that people are either male or female. In Australia marriage is between a man and a woman to the exclusion of all others. This bill would allow marriages from overseas solemnised between two women or two men to also be recognised in Australia. The problem we have is that, for some people like me, it is not as easy as that, it is not as black and white as that.

I got married in New Zealand 11 months ago. I have my marriage certificate here, which I will table, and you will see on that certificate that my sex on my marriage certificate is not male or female. It says ‘indeterminate’. I would have preferred, personally, that the sex would have reflected more accurately my sex, being part male and part female. They do have an option of ‘indeterminate’ in New Zealand and I chose that option, because that more accurately reflects me. I am fierce about being true to myself. I do not want to have to pretend, particularly in legal documentation, that I am one or the other, because I would be denying a part of myself.

I was raised as female. My first birth certificate said that I was female. I had a wonderful childhood and everything. I went to a Catholic girls school that I visited earlier this week. They invited me back. I am a former mayor of my local area, and I resigned from the council only a couple of years ago.

And two interactions with Senator Ian Macdonald, in the chair:

CHAIR: Or look out for buses. If you were in one of the states that had civil unions, or the other terminology for it that was mentioned earlier today for one state, would that address those issues?

CHAIR: I can understand that, but rights and responsibilities are things that can be addressed.

Mr* Briffa: To me, it is like the civil rights movement in America and saying, ‘It’s okay for the black people to sit at the back of the bus because ultimately they still get to their destination.’ It sets up a ‘you and them’
…
Mr* Briffa: If I could step away from same-sex marriage and talk about my marriage. If I was forced to undergo a civil union instead, by virtue of the way that I was born and not any other attribute—the colour of my skin, say—that would mean I would not be entitled to marriage; I would have to go through a civil union.

Mr* Briffa: I am very different because I cannot marry anybody.

Senator HANSON-YOUNG: You cannot choose to marry anyone.

Mr* Briffa: I cannot be legal to marry somebody of either sex. I am in a different situation. I am in a situation where if Manja was a man I would still have legal issues about being able to married. If Manja were a man, I would have to a woman and then I would still be concerned that because of my genotype, my genetics, by virtue of the fact that I was born with testes, my marriage could be invalidated because marriage is between ‘a man and a woman to the exclusion of all others’ and I am not a man or a woman. I am born part both.

The full proof transcript can be found here: