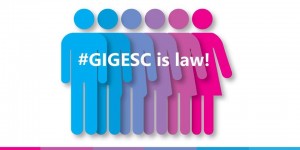 OII Australia joins with our European intersex and trans partner organisations in celebrating the passage of the Gender Identity Gender Expression and Sex Characteristics Act. The Act passed with cross party support, without a vote, in the small hours of this morning.

This is an historic moment. The Act contains key improvements from all existing Australian legislation that seeks to address intersex issues. This includes recognition of a right to bodily integrity and physical autonomy that protects infants and children from non-necessary medical interventions, of types that still take place in Australia and around the world for “psychosocial” rationales such as parental distress and improving marriage prospects.

These provisions meet several key demands of the intersex movement, and the 2013 recommendations of an Australian Senate committee report.

The relevant part of the Act reads:

The Interdisciplinary Team is to be appointed by the government, alongside a larger working group to establish improved treatment protocols, “in line with current medical best practices and human rights standards”. The Working Group will include human rights experts, and we hope to keep a close watch on implementation issues.

The Act also provides for a simple, administrative mechanism for the recognition of gender identity, and protection from discrimination for intersex, trans and genderqueer populations. It follows the third international intersex forum in Malta in 2013, and lengthy engagement between intersex and trans activists and the Maltese government.

We warmly congratulate the Maltese government and parliament, and commend this Act to Australian governments. This is legislation that Australian governments should be enacting, to implement the recommendations of the 2013 Senate committee report on “Involuntary or coerced sterilisation of intersex people in Australia”.

Non-necessary medical interventions still take place on infants and children with intersex variations, across Australia, for rationales that include managing parental distress, social stigma and even ‘improving marriage prospects’. These violate international human rights standards and Australian governments must act.

Organisation Intersex International Australia (OII Australia) is an intersex-led Public Benevolent Institution that promotes the human rights and bodily autonomy of people with intersex variations, and provides information, education and peer/family support services. OII Australia is not funded and is volunteer-run.

Intersex people are born with bodies that don’t meet stereotypical expectations for male and female, including a range of different genetic, hormonal and anatomical sex characteristics. People with intersex variations have as diverse a range of gender identities as non-intersex people.