Below is reproduced a letter written by Lili Elbe née Einar Wegener in 1930 shortly before the surgery that would lead to her death. The searing tragedy of her situation could not be clearer. The dangerous medical advice she had already been given and that resulted in tissue necrosis was surpassed by the attempted transplant she refers to in this letter.

Lili still loved and was deeply loved and had plans for her artistic future.

Please note that the editor of the published version of Lili’s memoirs changed some names to a degree in order to help protect the privacy of Lili’s spouse, friends and medical advisers who were still alive at the time of publication. 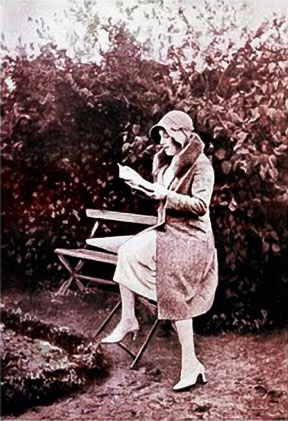 You have not heard from me for a long time, because I have been able to tell you nothing good about Lili. From time to time I have been examined by several doctors, but without result. Throughout they prescribed sedative remedies, which left me no better nor wiser than I was before: For I want to know what is happening to me, even if it hurts.

After consulting with Grete, Elena took me to one of her personal acquaintances who received me three hours before he was leaving Paris. Then something happened which sounds almost like a miracle! I had a consultation with the famous surgeon and woman’s doctor Professor Werner Kreutz, of Dresden. Strangely enough, he resembled you.

He examined me a long time, and then declared that my case was so rare that only one similar case had been known up till now. He added that in the condition in which I am at present, I could hardly be regarded as a living creature, because the ray treatment had been a great mistake, especially as it had not been preceded by microscopical examination.

Now he fears that this treatment in the dark may have destroyed my organs – male as well as female. Consequently, he wants me to go to Berlin as quickly as possible for the purpose of a microscopical examination. Some time afterwards he will operate on me himself. He wants to remove the dead (and formerly imperfect) male organs, and to restore the female organs with new and fresh material. Then it will be Lili who will survive!

Her weak girl’s body will then be able to develop and he will feel as young as her new and fresh organs.

Dear Christian, I am now sitting here and weeping like a child while I am writing you these lines. It seems so like a miracle that I dare not believe it. One thing however consoles me that were it otherwise I must soon die. Grete and I believe we are dreaming, and are fearful of waking. It is too wonderful to think that Lili will be able to live, and that she will be the happiest girl in the world and that this ghastly nightmare of my life is drawing to an end. This wretched comedy as a man!

Without Grete I should have thrown up the sponge long ago. But in these dark days I have had a fresh opportunity of seeing what a splendid girl she is… she is an angel. Overexertions, her own sufferings, have left her unscathed. She has contrived to work for two, now that I am no longer worth much.

I do what I am able, of course, and have exhibited and sold with success in all the important salons. But now all this is over. I am no longer fit for anything. I am like a wretched grub , which is waiting to become a butterfly. The operation is urgent and the doctor would like me to proceed to Berlin immediately, as some twenty days must elapse between the first examination and the operation and I must be in Dresden on the day he is ready to create Lili. He will send the medicine, which I am to take, in order to support the internal organs and thereby keep me alive until then.

For practical reasons I begged for some delay, and I told him that I should prefer so to arrange matters as to proceed to Berlin via Copenhagen, as I wanted first to hold an exhibition in Denmark. I would then proceed from Berlin to Dresden at the beginning of April. This does not particularly please the doctor; but he understood that I had suggested this for practical reasons.

A letter I can barely read without weeping. One of the reasons for the Intersex Day of Solidarity.