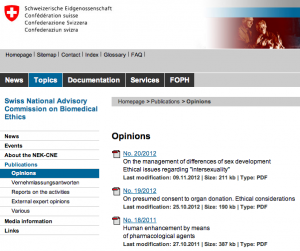 Earlier this month, the Swiss National Advisory Commission on Biomedical Ethics published an opinion document, On the management of differences of sex development, Ethical issues relating to “intersexuality”. Copies are available via the Swiss Federal Office of Public Health in English.

This is a brief review of the key points in that position document. Our guiding principles in reviewing the report on infant medical interventions are the following:

The position document satisfies each of these principles, and we believe that it might be the first national public health opinion anywhere to do so. While we would prefer to see use of the term “intersex” in English, rather than “difference of sex development”, we highly commend this important and ground-breaking report. That term is not pathologising per se, but it is indistinguishable from a pathologising term when shortened to DSD.

Recognition of efforts of advocacy groups

The Commission makes a welcome statement recognising the importance of self help and advocacy groups in drawing attention to ethical issues involved in the treatment of intersex people:

Until just a few years ago, questions concerning social attitudes to – and the medical management of – individuals with ambiguous sexual characteristics were not widely debated. It is largely thanks to the efforts of self-help/ advocacy groups that this situation has changed, and that increasing attention is now being paid to the topic of “intersexuality” in the media and in professional circles – including the fields of medical law and ethics – both nationally and internationally. The Swiss National Advisory Commission on Biomedical Ethics (NEK-CNE, hereafter “the Commission”) welcomes this development and hopes that, by issuing this Opinion, it can help to dispel any remaining taboos surrounding the topic

Psychosocial adjustment is the crucial issue in appraising rationales for therapeutic surgeries on intersex children. The Summary of Consensus Statement on Intersex Disorders and Their Management in 2006 was flawed in many respects, but most notably in its inclusion of the following rationales for “early reconstruction”:

The Commission report is the first that we are aware of to be critical of these rationales, and their long term impact on future adults. It comments (their emphasis):

Especially delicate are those cases where a psychosocial indication is used to justify the medical urgency of surgical sex assignment in children who lack capacity. Here, there is a particularly great risk of insufficient respect being accorded to the child’s (future) self-determination and its physical integrity…

Decisions on sex assignment interventions are to be guided by the questions of what genitalia a child actually requires at a given age (apart from a functional urinary system) and how these interventions will affect the physical and mental health of the child and the future adult. Treatment needs to be carefully justified, especially since – in functional, aesthetic and psychological respects – surgically altered genitalia … are not comparable to natural male or female genitalia.

Decisions are to be guided, above all, by the child’s welfare…

The harmful consequences may include, for example, loss of fertility and sexual sensitivity, chronic pain, or pain associated with dilation (bougienage) of a surgically created vagina, with traumatizing effects for the child. If such interventions are performed solely with a view to integration of the child into its family and social environment, then they run counter to the child’s welfare. In addition, there is no guarantee that the intended purpose (integration) will be achieved.

We agree with the approach adopted by the Commission. We believe that family concern, gender identity “risks” and social stigma should no longer continue to be factors weighed in the decision-making process around infant surgeries. Their inclusion serves to reinforce existing customary practice, at the expense of other human rights and ethical grounds. We believe that they should be excluded as rationales.

Children will not be aware of the differences about their bodies unless they are made to feel different by their parents and carers, including medical practitioners. Supportive family counselling is essential and the Swiss Commission makes an valuable statement regarding the purpose of such support – to facilitate a close bond between parents and child:

The initial aim of counselling and support is therefore to create a protected space for parents and the newborn, so as to facilitate a close bond. In addition, the parents need to be enabled to take the necessary decisions on the child’s behalf calmly and after due reflection. In this process, they should not be subjected to time or social pressures. Parents’ rapid requests for medical advice or for corrective surgery are often a result of initial feelings of helplessness, which need to be overcome so as to permit carefully considered decision-making.

It is important to bear in mind and also to point out to the parents that a diagnosis does not in itself entail any treatment or other medical measures, but serves initially to provide an overview of the situation and a basis for subsequent decisions, which may also take the form of watchful waiting.

The shifting of focus of medical interventions towards counselling and support, and away from surgical choices based on risks of stigmatisation is welcome, summarised by the following statement:

…on ethical and legal grounds, all (non-trivial) sex assignment treatment decisions which have irreversible consequences but can be deferred should not be taken until the person to be treated can decide for him/herself

Other notable recommendations include a statement that discrimination against intersex people is a form of sex discrimination that should be eliminated:

The long-established constitutional principle that no-one is to be subjected to discrimination on grounds of sex also applies to people whose sex cannot be unequivocally determined. Any discrimination resulting from existing regulations must be eliminated.

The Commission recognises that a third sex could lead to greater stigmatisation, while noting that the gender binary violates personal liberty:

…the Commission supports the idea that sex variations should be placed on an equal footing with the traditional categories of “male” and “female”, as no-one should be subjected to discrimination on the grounds of sex. Categorization as male or female which is driven by social factors or a desire for legal certainty, rather than being based on medical considerations or the sincere wishes of the individual concerned, represents an unacceptable violation of personal liberty. It also leads to unjustifiable discrimination.

The Commission supports an “unbureaucratic, low-threshold framework” for changing sex of rearing.

The Commission’s first recommendation is an acknowledgement of harm from previous practices.

The suffering experienced by some people … as a result of past practice should be acknowledged by society. The medical practice of the time was guided by sociocultural values which, from today’s ethical viewpoint, are not compatible with fundamental human rights, specifically respect for physical and psychological integrity and the right to self-determination.

There is a need for representative studies with sufficient numbers of cases and control groups comprising untreated or non-invasively treated … subjects. Data should also be collected on patient satisfaction and on the effectiveness of various treatment methods and surgical sex assignment procedures.

Support for the use of criminal sanctions

In the light of previous harm, and to ensure the elimination of customary practice on the basis of psychosocial adjustment, the use of criminal sanction is supported where unlawful interventions have been made:

There should be a legal review of the liability implications of unlawful interventions in childhood, and of the associated limitation periods. Questions of criminal law, such as the applicability of offences of assault (Art. 122 and 123, StGB) and the prohibition on genital mutilation (Art. 124, StGB), should also be investigated.