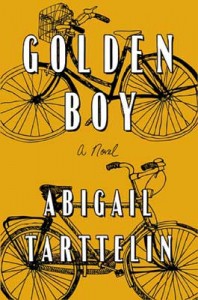 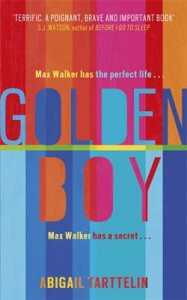 I loved this book. It vividly captures the effects of secrecy and shame on an intersex adolescent, and a family in crisis. It’s compassionately and beautifully written, from the perspective of six key characters: Max the protagonist, his brother, parents, doctor and friend.

Unlike Jeffrey Eugenides’s Middlesex, which manages to convey the impression that intersex people are a product of incestuous sin, or Kathleen Winter’s Annabel, whose promising mathematically-inclined (and impossibly self-fertile) character is emptied out by the destruction of his playhouse, the Golden Boy‘s story is realistically and eloquently described. Perhaps it’s helpful that the story focuses on a single episode in Max’s life, rather than attempts to summate a childhood or life story.

This book accurately portrays the difficulties in negotiating issues of conformity and autonomy, and the very human need to be true to one’s self. The competing demands of people around Max – for security, love and companionship – give the story meaning, and the human dimension which makes the book of welcome interest to a general audience. Who has not, at some time, suffered feelings of rejection, fears of intimacy, bodily discomfort and the need to fit in?

We hope this book might help to promote a greater understanding of intersex amongst the wider community. In this sense, too, it’s arguably “intersex lite”, the easily comprehended, mainstream, middle-class introduction to intersex that maybe we need it to be. We’ve yet to see a full spectrum account of intersex lives in fiction. This is no normalisation of intersex through that fact’s incidental relationship to a storyline, but we’re not there yet, and this is a major advance from popular culture references as freaks, losers, or even killers.

The author barely succumbed to the sensationalism that often seems inherent to fictional accounts of intersex people: a key element of the story is also the most improbable. This is simply because people with most intersex diagnoses, especially those discovered at birth like Max, so rarely escape radical surgical intervention along with infant sex assignment. Physical differences are frequently erased. It’s exceptionally rare that clinicians satisfy themselves with the minimalist removal of an ovotestis while retaining physical structures associated with men alongside those associated with women. Anecdotally, we haven’t encountered it. The more common experiences include surgical “normalisation”, lack of sexual sensitivity and removal of gonads, with consequential hormonal and fertility issues.

Of course, we would prefer more people to have the minimalist intervention experienced by the main character. Intersex people need to be free to explore our own identity and possibilities; this book will hopefully convince more people of the need for less intervention at a time when intersex issues are finally becoming more visible, both in Australia and internationally.

As an aside, it’s my own experience that my GP is one of my strongest allies. Our clinical relationship predates diagnosis and, at times, it’s felt like we’ve been on a roller coaster together – some of that caused by an unthinking non-consensual surgical outcome. With this perspective, it’s pleasing that the story includes a positively-portrayed doctor, as well as the range of other perspectives and experiences that also happen.

Assembling all the pieces in the story was one of the book’s less successful moments, before diving straight in to a lengthy, and traumatic scene of abuse with barely a clear understanding of who these people were. Once that stage has been set, the story is engaging and compelling.

So, the situation of the main character, while improbable, is handled carefully and believably. The author captures astonishingly well the difficulties faced by someone coming to terms with their bodily differences in the face of social, clinical and parental demands for conformity. Abigail Tarttelin shows empathy and warmth, and this book is highly recommended.