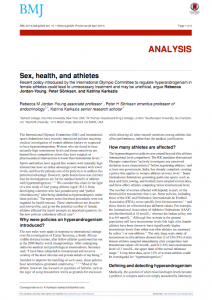 The British Medical Journal has today published an article on the current policies of the IOC, IAAF and FIFA, reporting that several women have recently been coerced into “partial clitoridectomies” and gonadectomies (removal of gonads) in order to compete. Partial clitoridectomies/clitorectomies are understood to be a form of Female Genital Mutilation.

The authors note that issues of ethnicity, nationality and perceived masculinity are interrelated, and authorities “actively investigate any perceived deviation in sex characteristics“.

This report comes in the same month that a national framework against homophobia in sport was adopted in Australia for same sex attracted athletes.

The report comments on policies in sport that require treatment of women with elevated testosterone (“hyperandrogenism“):

…sports bodies have also claimed that the investigations are for the medical benefit of athletes with hyperandrogenism. We consider this claim in the light of a new study of four young athletes (aged 18-21) from developing countries who had gonadectomy and “partial clitoridectomy” after being identified as hyperandrogenic under these policies. The report notes that these procedures were not required for health reasons. These interventions are invasive and irreversible…

The most striking and troubling illustration of these concerns is that all of the athletes in the recent report had “partial clitoridectomy.” Clitoridectomy is not medically indicated, does not relate to real or perceived athletic “advantage,” and is beyond the policies’ mandate. Moreover, this technique is long eschewed because it has poor cosmetic outcomes and damages sexual sensation and function. Clitoral surgery should have no role in interventions undertaken for athletes’ eligibility or health.

The sport policies are likely to disproportionately affect women with intersex conditions in which testosterone is especially high, such as congenital adrenal hyperplasia, androgen insensitivity syndrome, and 5á reductase deficiencies. These women may have no health complaints stemming from the androgen excess itself. Women with intersex conditions may also be investigated if they have not had genital “feminisation” surgery: doping officers observe athletes during urination, and they may report a woman perceived to have an enlarged clitoris. Thus, under these policies, women without symptoms or health complaints may have medically unnecessary intervention with long term consequences in order to continue their careers.

The women subjected to these procedures have no doped, they are not cheating, and they haven’t changed their sex classification.

OII Australia regards this as a gross violation of human rights, with lifelong impact.

We thank Katrina Karkazis, Peter Sönksen and Rebecca Jordan-Young for bringing these issues to light.

We are, incidentally, heartened to note that the British Medical Journal has reverted to using the word “intersex” on this article, in preference to “Disorders of Sex Development”. This follows recent articles in the American Journal of Bioethics, and the Australian Senate Committee report on the “Involuntary or coerced sterilisation of intersex people in Australia”.

Responses to this article

The BMJ is publishing responses to this article, including a response by OII Australia president, Morgan Carpenter, and the director of Advocates for Informed Choice, Anne Tamar-Mattis.

Read or contribute to responses here