We would like to thank Georgie Yovanovic, and ABC journalist Emma Sleath, for this personal interview published by ABC Alice Springs. Georgie is a spokesperson for Sisters and Brothers NT. 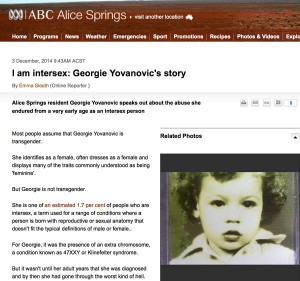 Most people assume that Georgie Yovanovic is transgender.
She identifies as a female, often dresses as a female and displays many of the traits commonly understood as being ‘feminine’. But Georgie is not transgender.

She is one of an estimated 1.7 per cent of people who are intersex, a term used for a range of conditions where a person is born with reproductive or sexual anatomy that doesn’t fit the typical definitions of male or female.

For Georgie, it was the presence of an extra chromosome, a condition known as 47XXY or Klinefelter syndrome.

But it wasn’t until her adult years that she was diagnosed and by then she had gone through the worst kind of hell.

We also extend our support to people at ABC regional offices at a time of upheaval. Local offices perform a vital function in telling local stories and news, sometimes of national import.

Read more and listen to interviews at ABC Alice Springs.