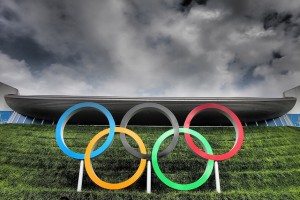 Photo by Farrukh of the aquatic centre, London Olympics. CC by NC 2.0 via Flickr.

Much of the reporting on some women athletes participating in the Rio Olympics is insupportable. It makes assumptions about their bodies, sex, gender identity and expressions that is deeply concerning. Much reporting fails to acknowledge the lack of scientific evidence for body policing by sporting institutions, and the deep personal cost of such assumptions, which range from personal humiliation and suicidality, to unnecessary, irreversible and harmful medical interventions in order to continue to compete in sport.

In contrast, we would like to draw attention to this excellent recent article by Katrina Karkazis, “One-Track Minds: Semenya, Chand & the Violence of Public Scrutiny”:

The relentless comments include the media’s and public’s willingness to scrutinize their bodies, question their identity, and invade their privacy with impunity. Such representations invite unwelcome speculation about the configuration of these athletes’ genitals, whether they have ovaries or testes, and whether their chromosomes are XX or XY. Too many have made assumptions about their hormone levels based on how they look and how they perform, questioning whether they should be allowed to compete, or even be considered women at all. One journalist disturbingly called women subject to investigation “uncategorised” — a declaration indicative of the kind of privilege that comes from having a body or gender presentation that escapes such scrutiny…

The violation of privacy has taken place in ways horrifying and yet predictable. Karla Holloway, the James B. Duke Professor of English & Professor of Law at Duke University, has noted that privacy is implicitly reserved for socially-privileged groups: male, white, heterosexual. Living outside these interlocking privileges means inhabiting a body that is always, to some extent, treated as public and open to scrutiny, probing, and coercion in way invisible to the institutions and individuals doing the looking. It is thus not surprising the vast majority of the women investigated under the IAAF policies have been brown or black women from the Global South.

In 2014, Morgan Carpenter, then president of OII Australia, joined other experts on human rights, sport, and intersex, in a letter to the IAAF regarding the disqualification of Dutee Chand and the IAAF’s “hyperandrogenism” policy. The letter has just been published.

In recent days, three clinicians with involvement in IOC policies on sex testing women athletes, have also made a statement against sex testing and indiscriminate public scrutiny, in “The Olympic Games and Athletic Sex Assignment”, in the Journal of the American Medical Association.

These articles draw attention to the personal cost of speculation and salacious attention to the bodies of Caster Semenya and Dutee Chand. We believe that bodily diversity is good, necessary and to be celebrated; and we seek an end to the stigmatisation of bodies that are different. We wish Caster and Dutee all the very best in coming days!

Brook B. There should be no questions about Caster Semenya’s right to compete at the Olympics, say experts. News.Com.Au. 16 August 2016.