Events are taking place around Australia for Intersex Awareness Day

26 October is intersex awareness day, and events are taking place in multiple capital cities across Australia, and in cities elsewhere, all around the world. These hopefully provide a chance for individuals to find out more about intersex people, our lives, and the human rights issues we face.

The last year has been both exciting and hugely challenging, and the events of the year have highlighted to us just how far we have come, and the journey yet to travel.

On the plus side, more people around Australia have heard of intersex people, including through our participation in the Mardi Gras parade thanks to the organising work of Bonnie Hart. Triple J Hack published a great radio and web interview while we prepared for this event, and it followed a first ever retreat in Darlington, Sydney, for advocates and peer support workers from intersex-led organisations and others, from around Australia and Aotearoa/New Zealand. 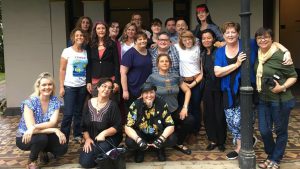 Most participants at the Darlington retreat. Photo courtesy of Phoebe Hart.

The Darlington Statement provides a powerful set of demands, and we commend it to policy and lawmakers, to medical practitioners, and to allies alike. Consider reading it, and how your institutions can adopt it. The Statement marks a turning point for our community – because it has helped to create an intersex community, with more and more intersex voices speaking up and calling for action. Amongst those calls, eight intersex people participated in a breakfast event for Intersex Awareness Day at the federal parliament, kindly sponsored by eBay and the National LGBTI Health Alliance. 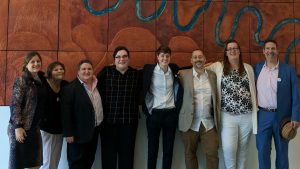 Participants in the Intersex Awareness Day event at the federal Parliament. Thanks to Graham Perrett MP, Senator Janet Rice, and Trent Zimmerman MP, their staff, and the event sponsors including eBay.

In considering the challenges we face, research on medical practices around Australia, and news of two Family Court decisions (Re: Carla and Re: Kaitlin) show that forced and coercive practices remain routine across Australia, despite claims of improved medical practices and fewer such procedures. Increasingly, we are aware of the use of IVF and other measures to eliminate bodies with intersex traits from the gene pool.

At the same time, comprehension of intersex issues even within LGBT spaces remains low, and we are aware that institutions that genetically select against intersex traits have sponsored ‘LGBTI’ events and are even nominated for a national ‘LGBTI’ award. These issues do not simply raise concerns about lack of comprehension, they raise concerns about the nature of community. 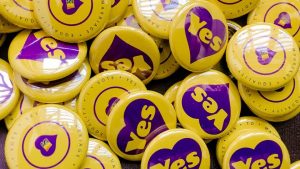 The postal vote on marriage equality has deeply affected many intersex people. Many of us are directly affected by the current marriage law, and our organisations have campaigned and supported a yes vote. At the same time, those of us who are heterosexual and who identify with legal sex assigned at birth have frequently been part of those campaigns at the same time that we have been misrepresented in media and campaign materials as non-heterosexual, as queer, and as transgender. These misconceptions are barriers to new connections between individuals and our community. The reality is that people born with intersex variations are wonderfully diverse, with great variation in sex characteristics, sexual orientations, gender identities and expressions.

This shows that current awareness levels give much room for improvement, and existing claims of inclusion in ‘LGBTI’ by acronym are inadequate. These issues also show that resourcing earmarked for ‘LGBTI’ populations is not making its way to the organisations that actually provide support to individuals and families. This has become a form of disenfranchisement that is a brake on progress for our population. 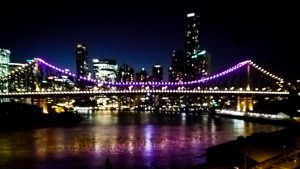 Internationally, reports by mainstream human rights bodies such as Human Rights Watch (with interACT) and Amnesty International, show that intersex rights are mainstream human rights issues. Three former US Surgeons General and the Nobel peace prize co-recipient organisation Physicians for Human Rights have also made powerful statements on our right to bodily integrity. These demonstrate that there is no clinical consensus favouring forced and coercive medical practices on children with variations of sex characteristics. The Yogyakarta Principles are in the process of being supplemented to better recognise the rights of intersex people, in part through a ground of ‘sex characteristics’. Progress in Australia is conspicuous in its absence.

Nevertheless, OII Australia has engaged with human rights institutions, lawmakers, governments and their departments, allies, clinicians and others. We have also made shadow report submissions to multiple UN Treaty Bodies, endorsed by the AISSGA, Disabled People’s Organisations of Australia, National LGBTI Health Alliance, and People with Disability Australia.

Please consider how you can support us in achieving these demands.

Intersex Awareness Day is a great opportunity for people to attend one of the intersex events organised or to set up their own event to discuss intersex people and our human rights. The OIIAU website is a great resource for people wanting to learn more about us.

Intersex visibility is so important to help create a world free of stigma and shame and for all of us to be empowered to make free and informed choices over our own bodies and lives. This Intersex Awareness Day, help increase that visibility by sharing our stories and the issues that we face.

The treatment of 5-year old Carla in the 2016 Family Court case Re: Carla (Medical procedure) was outrageous, but this treatment began years before the case was taken, with what the judge described as surgery that “enhanced the appearance” of her genitalia at age 3 years. Carla’s later sterilisation was justified by the judge using claims of technical inadequacy and an appeal to gender stereotypes. It deliberately proceeded before Carla could consent. There is no jurisdiction in Australia where such abhorrent practices are forbidden. This must change.